NEW RELEASES – The Vaca Muerta is an area situated in the province of Neuquén, in Argentina’s southern Patagonia region. The area is now the world’s second largest producer of natural gas obtained through the practice of fracking. Highly controversial and debated, shale extraction is threatening human rights and carries with it many environmental implications. Particularly, the indigenous community is affected. The Mapuche leader of the community complained: “Indigenous people are seen as just another element of nature and as such they are trampled on.”1 This article will seek to explore the human rights implications of fracking with a particular focus on Argentina.

In simple terms, fracking consists in a process of drilling down into the earth before a high-pressure water mixture is directed at the rock to release the gas inside. “Water, sand and chemicals are injected into the rock at high pressure which allows the gas to flow out to the head of the well.”2 The term “fracking” refers to how the rock is fractured apart by the high pressure mixture. Fracking, shorthand for hydraulic fracturing, has been used for more than 60 years. Today, shale extraction is mostly responsible for surging U.S. oil and natural gas production.3 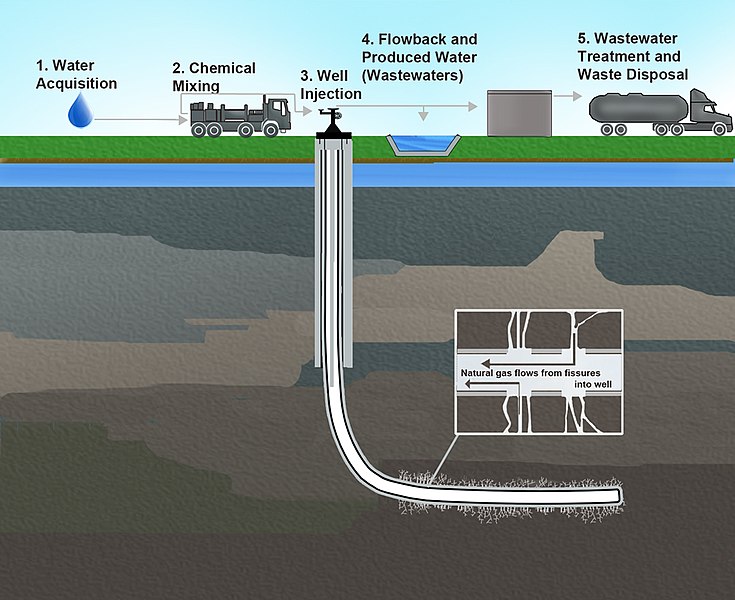 After the United States, Argentina is the largest producer of natural gas from shale in the world. It all started when the American enterprise Chevron signed a deal with YPF (an Argentina’s state-owned oil company) in Buenos Aires which determined the investment of 1.240 million dollars to establish more than 100 wells in an area of 20 km², the Vaca Muerta.4 In fact, the Vaca Muerta’s deposits represent the third largest source of natural gas in the world, after China and the United States. For this reason, Argentina has been defined as the “New Saudi Arabia.”5 The deal was highly criticised by many opposition groups, such as the Red Nacional Ecologista de Argentina (Renace), which referred to the Chevron as “the dirtiest partner” (socio más sucio.) Chevron was in fact condemned in Ecuador for the contamination of 500.000 hectares of Amazon forest, which affected 30.000 members of the aborigine communities of the region.6

Today the Vaca Muerta is currently exploited for its natural resources with its 400 wells.7 YPF explained: “It’s not the same thing to do this [fracking] in the overpopulated Europe or in Buenos Aires as in the Patagonian desert. Fracking takes place at 3.000 meters in the ground whilst the aquifers place themselves at 200m.”8 However, it’s still extremely difficult to access these sites in Argentina, as French journalist and director of the documentary “Terres de schiste” Grégory Lassalle’s experience shows. If the companies have nothing to hide, why not allow a journalist to document their activities?

Greenpeace explains: “While fossil fuel companies claim fracking has been practiced safely for decades, we actually know very little about its long-term environmental impacts.”9 New technologies have made fracking more profitable and attractive to fossil companies, but also more dangerous for human health and for the environment. The same companies that are using the extraction practice of fracking, have warned their investors that “fracking carries the risk of chemical leaks, spills, explosions and other environmental damage, not to mention serious injury to workers.”10

Firstly, fracking can lead to water pollution. The fresh water that is injected in the ground is mixed with toxic chemicals – the so called “fracking fluids.” Environmentalists have stated that potentially carcinogenic chemicals may escape and contaminate the areas around the fracking site.11 Moreover, earthquakes are more likely to happen. Climate change is also fuelled by fracking and air quality worsens since methane gas is released when fracking occurs. “Methane gas is a less common but more potent greenhouse gas than carbon dioxide. In fact, it’s 85 to 105 times more powerful than carbon dioxide at disrupting the climate over a 20 year period.”12

Fracking is not only affecting the unique environment of Patagonia. It is also ruining the lives of the indigenous communities living in the Neuquén province. Currently, 22 Mapuche communities live on top of Vaca Muerta, together comprising about 1,000 people. These communities, along with conservationists and environmentalists, say the gas extraction technique has severely polluted their land and water.13

Article 8 (2) (b) of the United Nations Declaration on the Rights of Indigenous Peoples states:

“States shall provide effective mechanisms for prevention of, and redress for: […] Any  action  which  has  the  aim  or  effect  of  dispossessing them of their lands, territories or resources.”

The Mapuche people argue that they were never consulted about proposed fracking or energy projects to use their ancestral lands, in spite of what stated in the UN Declaration. Albino Campo, “logko” or chief of the Campo Maripe Mapuche community, stated: “We are the owners of the surface, and of what is above and below as well. That is the ‘mapu’ (earth). It’s not hollow below ground; there is another people below.”14 Moreover, Jorge Nahuel, spokesman for the Mapuche Confederation of Neuquén, underlined that fracking is “an industry that has a major environmental and social – and even worse for us, cultural – impact, because it breaks down community life and destroys the collective relationship that we have with this territory.”15

Importantly, Martin Alvarez (of the campaign group “Observatorio Petrolero Sur”) told BBC’s journalist Grace Livingstone that fracking not only poses a risk to Mapuche communities, but also to the wider rural population of 54.000 people in the province.16 Alvarez’s group is calling to immediately stop fracking on indigenous territory, farming land, nature reserves, urban areas and sites near water sources such as rivers, lakes and lagoons. The possibility of investing on renewable energy is often put forward. We can only hope, now, that these voices will be heard.

This article was inspired by a side event organised for the 33rd Human Rights Council in Geneva by Europe Third – World Centre (CETIM.) The one of fracking is an issue that is not discussed enough in our society as the scarce number of people attending the event in September goes to show. Rather, we should shed light on the issue more and more and invest in renewable energy to safeguard the environment and protect fundamental human rights, especially considering the vulnerable position of indigenous people.

United Nations Declaration on the Rights of Indigenous Peoples 2008. Available at: http://www.un.org/esa/socdev/unpfii/documents/DRIPS_en.pdf

What is Fracking?, “Introduction”. Available at: http://www.what-is-fracking.com/what-is-hydraulic-fracturing/

"LET’S OPEN THE DEBATE AT THE FIFDH