Home Gorin Valérie : « A picture to change the world ? »

Gorin Valérie : « A picture to change the world ? »

The 2 September publication on social media of the photograph of Aylan, a 3 year old Syrian child found dead on a Turkish beach, crystallized the representations around the migration crisis in the public opinion and the western politics. Acting as a real symbolic condenser, the photograph has already been ranked as a photojournalistic icon by numerous journalists and politicians for the debate it created. The original picture taken by photographer Nilufer Demir and relayed by a great number of international media, portrays the child as if he were sleeping on the shore.

If the emotional impact is undeniable, it is because the photograph gathers four strong elements, which are, moreover, strongly recognized and perennial in photojournalistic pictures that stage suffering.

1. The victim is a child, he therefore incarnates purity and innocence by essence. He is disembodied of any political ideology, of any malevolent desire. This spring of the “victimhood” narrative has been in the centre of humanitarian representations since the first NGOs started to massively use pictures of children at the beginning of the 20th century, in contexts of famine (like Ukraine in the 1920’s) or of war (like Spain in the 1930’s).

2. The child is alone, which accentuates the perception of his isolation and helplessness. Photographers and experts in communication are all affirmative on this point: The individualisation of suffering works much better than the vision of a group, as it enables identification. When we have a child left alone, then it is the adult’s responsibility that is questioned.

3. The child is dead, and this is one of our contemporary societies’ strongest taboo. Our relation to death has indeed largely entered in a form of invisibility since the end of World War I, to become almost more obscene and voyeuristic. Although the picture of Aylan does not enclose a graphic death (no injury, no blood, and no shredded body) and the child seems to be asleep, the metaphor of the dead child signifies the annihilation of the entire future of a nation.

4. The child is washed up on the beach by the waves. The impression of unease is there, and this is maybe the most sensitive point of this picture. In this vision of a child joggled by the current, as if he were a mere pile of clothes pushed away by the waves, there is something terrible. The sea rejected this child as it would have done with a tree trunk or a plastic bag. The dreadful “garbage” metaphor is undeniable, and it accentuates the unease. The hashtag associated to the picture, #Humanityfailed, makes no mistake about it. This child, a martyr symbol of the fate of thousands of refugees that European politics refuse to acknowledge, grounded on an European land, as if to ironically show us what we don’t want to see.

Many things have been said about the power that this picture has or will have to bring a shift in mentalities and in politico-juridical decisions on the fate of migrants and refugees. If we limit ourselves to the photography, at the present time it is very hard to tell which effects the picture of Aylan will have in the long term. There lies all the difficulty of understanding how a picture impacts on mentalities. The rhetoric that we can have on certain icons of photojournalism shows that a picture exercises collective memory on the long term, but its instant effect sometimes remains relative, if not incorrect.

The picture of Aylan has often been compared to other photographic icons representing dead or dying children and considered as having had an important impact at the time on pacifist and/ or humanitarian discourses (i.e “Ces photos d’enfants martyrs qui ont bouleversé le monde” published in Le Point on 3 September 2015). This vision is unfortunately wrong in some cases. 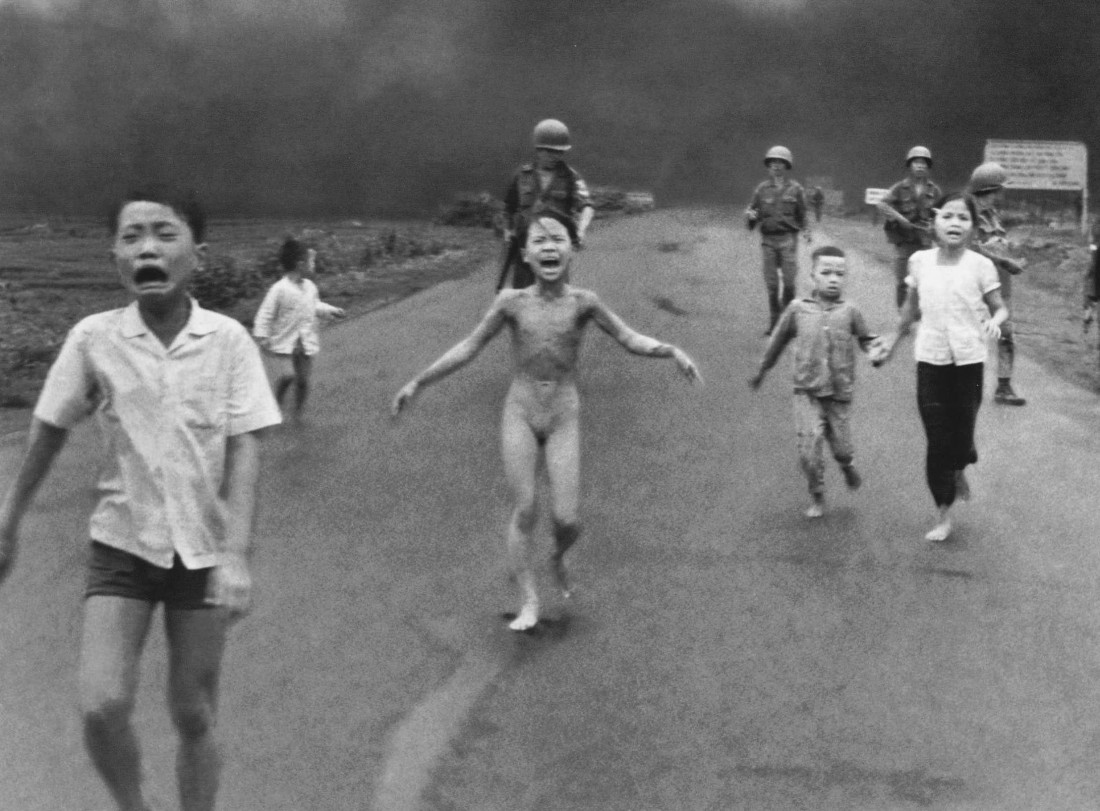 Take the first example to which the photo of Aylan was associated, that is the world famous picture of the young girl that has been burned by napalm, taken by photographer Nick Ut on the road to Saigon, in April 1972. The picture is considered as an absolute icon that mobilized Americans against the war in Vietnam. Nothing is more wrong. The picture comes late – it dates from 1972, a period when Americans had already significantly started to withdraw their troops. Yet demonstrations in opposition to the war in Vietnam will be at their height much earlier, between 1966 and 1968. It is other pictures, showing wounded American soldiers, which mobilized public opinion. However, in the collective memory, it is this picture of the young girl and napalm that crystalized the American failure in Vietnam later on.

Another example that is often put in parallel with the picture of Aylan, is the photograph taken by photographer Kevin Carter during the terrible Sudanese famine of 1993. This crouching little girl, exhausted, with a menacing scavenger in the background, led its author to win the Pulitzer Prize in 1994. He will however commit suicide three months later, tormented by remorse and by a profound post-traumatic stress. The picture will generate an outcry in the public opinion, given how it gives the impression of imminent death of the child. The photographer will be accused of doing nothing to save her. A 2011 counter-inquiry by the newspaper El Mundo will however reveal that the child survived by managing to walk to the nutrition centre. There too, the impact and the extent of this picture in the collective memory reveal a dissonance with the reality of the facts. If this picture shocked the opinions, it is mainly to discuss the deontology of photographers accused of being scavengers themselves. Ironically, it didn’t change anything about the humanitarian situation itself, as the Sudanese famine was largely ignored by international media which was focused on the Somali famine at the time, much to the discontent of NGOs, which talked of an image deficit and of a “forgotten crisis” for Sudan.

Finally, last picture to echo Aylan’s fate, the picture of young Omayra Sanchez dying, agonizing for almost 60 hours, feet stuck in the mud as rescuers try everything to dig her out. The photograph was taken by photographer Franck Fournier in November 1985, after the eruption of the Nevado Del Ruiz volcano in Columbia which resulted in the death of over 20’000 people. Omayra’s death has everything of a nightmare: She is exposed to the cameras which are there to film her slow and direct death, eye to eye. Her black gaze (resulting from haemorrhages) is fixing us and the picture becomes haunting. Omayra didn’t die due to lack of aid; she died because rescuers were not able to bring a hydraulic pump in time, due to the lack of helicopters. However, journalists were there. The picture will have a double effect: a positive dimension, as it will result in important donations. But also a negative dimension, as it crystallizes a macabre vision and the need for voyeurism for certain people who long to witness death live. The Omayra “case” will at least result in a tightening of the debate on deontological rules in journalism and in a push towards more ethics amongst humanitarians and photographers.

In the end, we can therefore remain perplexed as to the effective capacity of the photo of Aylan to make a change. Is it just a lot of fuss about nothing? “Photography doesn’t change History but its actors”, declared Iranian war photographer Reza in an interview in 2010. It is probably towards this perspective that we must turn, if we want to understand what it means for a picture to have a “power”. Before believing that a photograph can change History, it is necessary to understand what people do with it and what discourse it will graft itself onto: the photographer who first took it, then the editors who chose it, the public who comments it, the politicians who play on it.

However, the picture of Aylan revealed a change compared to the abovementioned examples: The emergence (or the return?) of civil society. The Aylan picture was primarily shared on Twitter by thousands of people, before journalists found it. This phenomenon is not anodyne. It shows that the information flows have changed: journalists now use social media as an important resource to understand the daily news. It also shows that the public is no longer depending on a magazine or a television channel to show them what is important - and this is maybe the most important thing to understand about the relation between a picture and society. Civil society can henceforth decide of the agenda, by tweeting, by “liking” pictures on Facebook that will then become viral. By studying these phenomena, we can then try to understand the heart of the complex relationship that links emotions, pictures and politics.

Researcher and Lecturer in History and humanitarian communication

"LET’S OPEN THE DEBATE AT THE FIFDH